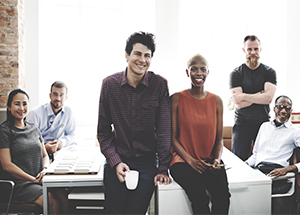 Recently, Ron Price and I published a leadership fable, Growing Influence: A story of how to lead with character, expertise, and impact. Along with teaching leadership principles, the story tackles gender discrimination in the workplace. The main character, Emily, meets and befriends an older retired CEO named David. Through their friendship, David is exposed to the unconscious (and sometimes quite conscious) biases in the modern workplace; Emily benefits from David’s wisdom over years of leadership and uses what she learns to overcome what feels like an impossible situation.

We tackled unconscious bias because it matters. Greatly. Not just for the people on the receiving end of bias but also for the leaders, teams, and companies who are missing out on diversity across age, race, gender, and more. Here’s why.

Where is the Diversity?

I was recently invited to a leadership training. It was a well-planned, high-level afternoon with valuable information and connections. And while I walked away better than before I came, one session stuck with me—but not for the reasons you might think.

This particular session was focused on hiring practices. The presenter spent the better part of an hour laying out his strategies for attracting and retaining top talent. These processes, he said, were effective beyond his company. And they were attractive: online forms, spreadsheets, detailed reports, company transparency—all the latest and greatest in finding and keeping the best of the best. I scribbled notes, thinking of how to apply what he was teaching into my own businesses.

And then he pulled up a slide. I stopped writing and stared at the image in front of me.

Was I seeing what I thought I was seeing?

The slide contained an organizational chart with about thirty employees. But rather than just names, it also included faces. The trouble was, nearly everyone in the company looked alike. It was like a carbon copy of the same person with slightly different smiles and hair colors. With some exceptions, nearly everyone was the same gender and about the same age.

He went on to explain how his process vets through several layers and has steps and stages for every potential hire, plus on-boarding and technology that encourages collaboration post-hire. But was it fostering diversity? The answer, plainly, was no.

I don’t fault this presenter. His processes were smart and well-thought. He seemed like a good leader who cared to grow a strong company and treat his people well. He had tested and retested until he felt he had the best hiring and retention practices possible.

But like many of us, he was dealing with unconscious bias, also known as implicit bias.

The company’s practices were clearly favoring recruitment, hiring, and retention of a specific group of people—preferring one set of individuals with certain qualities (gender and age range) over others.

The fact is, our brains are wired for this sort of thing. We’ve all seen the studies: men are more likely to consider male candidates more qualified, want to hire other men, give those men a higher salary than women, and be willing to invest in those men. We also know age-based stereotyping is prevalent in the workplace; one group of researchers call such biases the “silent killer of collaboration and productivity.”

While it’s normal to think, “well, that’s not me,” science says otherwise.

In one study, MRI scans showed that when we’re confronted with someone who is different than us (in this study, a different race), the amygdala—known as the emotional processing center of the brain that deals with fears, threats, and more—lights up. The frontal cortex, which is involved in “forming impressions of others and in measuring empathy,” also lights up, leading toward unconscious decision-making.

We are all wired for unconscious bias—even those of us who are dedicated to equality. Without even realizing it, we’re making judgments about others, which are influencing our decisions. At work, this plays out in hiring, promoting, mentoring, and much more.

Bias and the Bottom Line

Research also tells us that “being around people who are different from us makes us more creative, more diligent and harder-working.” This is, in part, because our brains have to work a little harder.

When someone presents a fresh viewpoint—or even a similar viewpoint from a different lens—we tend to pay closer attention. Diversity disrupts intellectual autopilot and causes us to be more engaged and aware.

And for you money-minded readers: diversity is good for the bottom line. According to a study by McKinsey, companies in the top quartile for racial and ethnic diversity are more likely to have above-average financial returns. And a study by the University of California, Davis found that “among the 25 firms with the highest percentage of women execs and board members, researchers found that median returns on assets and equity in 2015 were at least 74% higher than among the overall group of companies surveyed.”

So what can we do? If we’re wired for bias, how do we change?

For one, do what your’e doing—right now, by reading this article, you have engaged in thinking abou tyour own biases. Perhaps you have developed deeper awareness than you had five minutes ago. Continue learning about unconscious bias and watch for it in yourself and within your teams.

Second, measure. If you’re in a leadership position, take an honest look at your company’s org chart. Do you see much of the same? Don’t be fooled by a few diverse employees peppered throughout—objecitvely analyze your employee base.

Third, set real metrics. Aim not just for a “more diverse workplace” or “more women and people of color on the board.” Instead, set measurable goals like 50% women and 50% non-white. When you have real numbers attached, you’ll be amazed at your team’s ability to find solutions and create best practices that get your company closer to those goals.

Fourth and finally, check in with yourself. Do you notice that you listen more to the people on your team who are like you? Do you find yourself mentally dismissing opinions that don’t validate your own? Awareness needs to be paired with action. Invite people who aren’t like you to contribute; give opportunities to someone who is deserving but maybe wasn’t your first pick; encourage others on your team to seek out and foster divergent thinking rather than falling into group think.

We may be wired for bias, but we aren’t destined for it. There is a brighter, more diverse, more creative, and more effective workforce ahead of us. It’s up to us to make it happen.

This blog originally appeared on theindifference.com.