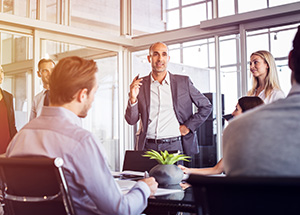 I was recently asked how I would coach a highly successful employee who had been promoted to supervise a team. After the promotion, this individual’s performance, and subsequently that of the team, dropped dramatically. He experienced what might be called “The Dip.”

I wish this was an uncommon scenario.

Companies often make the mistake of taking employees who are succeeding in non-supervisory roles and promoting them to management roles—without adequate support for the new function—and expecting them to thrive. An example would be promoting a great sales person to the head of a sales team. The thinking goes something like this: They been very successful so far, so let’s promote them to management as a way of spreading their ideas and approaches, which will make the company even more successful.

Unfortunately, the skills for each role are different, and not all star employees will make a successful transition to a leadership role.  Marshall Goldsmith’s well-known book, What Got You Here, Won’t Get You There,and his most recent collaboration with Sally Helgesen, How Women Rise: Break the Habits Holding You Back from Your Next Raise, Promotion or Job, both document some of the common behaviors that sabotage new managers. Behaviors such as building rather than leveraging relationships, not asking for help, trying to be perfect, micromanaging others, and simply taking on too much.

Back to the situation with this new leader and “The Dip.” He obviously had expertise, as he had demonstrated great success in his previous role. The challenge now was to succeed as a leader of a team. There are many ways to coach someone in this predicament, but this was my advice:

I recommended Inner Circle Coaching, an approach mastered by my colleague Whit Mitchell. This method engages the leader, up to five people who report to the leader, and at least one person above the leader. What is significant in this situation is these people already work with this new leader and have developed an impression of how effective he is. Inner Circle Coaching involves people around the leader in the improvement process. The selected people agree that they will participate in working on improving themselves, as well as helping the leader improve.

As a part of this coaching, the new leader and his team take the TTISI TriMetrixHD behavioral assessmentto increase self-awareness and create a common language about leadership skills in the company. Afterward, all participants meet individually with the coach for a debrief of their TriMetrixHDreport. They then respond to three questions: What am I going to work on to improve myself? What am I going to do to support my manager or my direct report to improve? And what can my leader or direct report be better at? This information is gathered, and a summary of responses from the last question is provided to the new leader. The new leader selects what he is going to work to improve, and that is communicated to all the participants so they know what to watch for and support.

This process is targeted and open enough to engage more than the new leader for committing to improving. The new leader has help from the other participants inside the organization, as well as the coach. This broad participation can increase the impact and likelihood of successfully reversing “The Dip” of the leader and team.

To learn more about The Dip or Inner Circle Coaching, contact francis@price-associates.com.