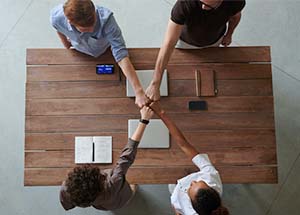 How to foster teamwork skills

From Episode 77 of The Complete Leader Podcast

We all love to root for and celebrate winning teams—but how exactly do we create one?

Skip Hall, an old friend and NCAA football coach, once told me that on average players only get 11 to 20 minutes of play per game. That’s it! They’ll commit 20 hours of practice and preparation per week just for this short amount of time on the field. For a successful team, that time can pay off in wins and championships. However, if your team isn’t versed in the skills needed for successful teamwork—communication, goal orientation, relationship building—they won’t be winning many games.

Teamwork is a skill that’s just as relevant on the office floor as it is on the field, and it’s not simply getting along with others or sharing a company name on your business card. Nor does it come automatically. It’s one of those skills that requires several other leadership skills to be truly effective, and you—and your teammates—will have to work hard to be successful.

To tap into the magic of working with others, you first need clarity on what a team is, which other leadership skills are necessary, and how to intentionally grow a successful and synergistic team.

What is a team?

I have learned the most about what exactly a team is from Andy Johnson and his book Pushing Back Entropy: Moving Teams from Conflict to Health. He explores the four different ways we talk about collections of people and how to build health into teams. The problem is, “team” often becomes an organizing term, the word we use to describe something even when it really isn’t a team. To build the most successful and effective team, we need clarity on who is a part of it.

The first three of Johnson’s groups actually cannot be considered true teams. These are groups, organizations, and tribes, and how and why they come together matters. Within a group, members associate because there is a sense of belonging or a common purpose. For example, I have a AAA membership. I don’t know all of the people in this group, and they don’t know me, but we all have the common purpose of wanting roadside assistance.

In organizations, structure, management, and clear lines of order and authority all exist, but an entire organization doesn’t act as a team. For example, any franchise store such as Home Depot or Target may have teams in their individual stores, but outside of that they are likely not aiming for the same purpose. Their goals are different from store to store, from location to location. Tribes, on the other hand, do have shared values or beliefs.

As another example, I’m a member of TTI Success Insights, whose members use and teach a specific set of tools for leadership. We get together a couple of times a year to talk about how to use those, and how to work better or serve our clients better, but we’re not working together as a team. We’re just getting together to share our values and common beliefs so that we can become better people as a result.

While a true team has elements of these three collections, what really sets it apart is shared consequences. As a team, you are all working with the same purpose in mind, toward the same results. There is often a clear structure and shared values that help you work more effectively together toward that goal. Most importantly, you all succeed or fail together, just as a sports team or an orchestra does—a true team’s destiny is intertwined. This is why teamwork is worth investing in as a skill and worth developing as a leader.

How do you grow a successful team?

Being skilled in teamwork involves several other leadership skills, for both leaders and team members. As a leader, it begins with great listening skills—it’s difficult to be a great team manager if you don’t understand the people you work with. You need relationship building skills to understand, evaluate, and empathize with your teammates, and persuasion, negotiation, and conflict skills to be a strong figurehead for your employees. Goal achievement skills are also useful for the ability to recognize, define, and organize your team around a single result—you need smart and engaging goals that everyone will buy into.

You may already be using these skills. You may even be on several teams at once, leading some and following on others. Work is changing so rapidly these days with companies moving away from a traditional, hierarchical structure into a design more built around networks of teams, and clarity is essential. Unfortunately, I still often see position descriptions that fail to mention anything about the role the position plays on the team. Each person needs to know their role, and that role also has to be the right fit for them. Once roles and goals are defined, ensuring adequate resources is the next step, whether that’s money, the right number of people, technology, infrastructure, or communication systems. These will also help define the milestones, consequences, and rewards that help a team function better, faster.

Getting to know each other on a deeper level is the final piece. This is not a superficial thing—it’s not just having a fun day of team building exercises together—you really need to know each other if you’re going to work well together. Begin with the obvious questions: who are you, what’s your role? Then ask further: what’s your background, why are you here, what’s unique about you, how do you deal with change? Do this at the beginning and you’ll get a fast start at building a highly effective team.

Header image by Fauxels of Pexels.