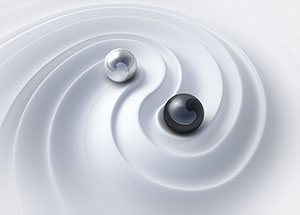 A Yin and Yang Look at the Eight Types of Leaders

In an interesting 2010 study, a team of researchers led by Adam Grant of the Wharton School of the University of Pennsylvania set out to understand a nagging question in the leadership world. Who makes the best leaders?

Adam Grant and I both identify as social introvert. A social introvert is someone who is slower-paced, inward-oriented, and stimulation-averse, who loves people in usually smaller doses, is not shy and enjoys talking long and deeply with them. Though Grant conceded that the literature is extremely biased in favor of extroversion as a prerequisite trait for leadership, he and the research team wanted to test leadership effectiveness as it relates to different kinds of followers. The setting of their study was a group of pizza franchises.

What they found was encouraging. Who makes the best leaders? It depends. For those workers who are highly self-motivated and proactive, introverts were the most effective leaders. For those workers who were lacking in self-motivation and more passive, extroverts created a healthier bottom line. Leadership is not a one-size-fits-all concept. The diverse nature of groups and organizations suggests that the best leadership solution is found in the combination of divergent leadership styles working together.

Yin leaders, according to recent article by Jennifer Kahnweiler, are uniquely situated to lead in the emerging millennial culture. She specifically noted four yin strengths that connect with the identified needs of millennials at work: one-on-one interactions, listening and asking great questions, preparation and careful planning, and calm and reasoned reflection. Millennials are looking for the kinds of leaders we will explore in depth shortly: planned, analytical, team-oriented, and wise. They want leaders focus not just on the bottom line but on making the world a better place.

It comes as a surprise to many that some of the most successful entrepreneurs in our culture are actually yin leaders. I have use the term intrapreneur to describe this new breed of intensely successful leader and innovator who is clearly on the introverted side of the equation. Current intrapreneurs include Warren Buffett (one of the wealthiest men in the world), Bill Gates (founder of Microsoft), Mark Zuckerberg (founder of Facebook), Tony Hsieh (founder of Zappos), Larry Page (cofounder of Google), and Reid Hoffman (cofounder of LinkedIn).

For this reason, some have suggested that self-aware introverts, when they maximize their talents, can flourish in entrepreneurship and other fields once thought to be only the province of extroverts. This is consistent with the findings of psychologist Hans Eysenck, who many years ago found that successful business people were, on the whole, stable introverts who were able to leverage their self-efficient, hard-working attitudes and introspective, analytical style of leadership. These yin leaders operate from a mixture of slow-paced, safe, cautious, team-related focus and quality-driven, project-focused, analytical, creative and detail-oriented focus. The four kinds of leaders can be identified on the yin side:

Planned Leaders pay attention to the details of the plan and make sure the team gets everything done that it needs to while maintaining the highest levels of quality. They see the trees individually and not just the forest. Their close-up view often complements the yang leader’s view from 35,000 feet.

Analytical Leaders use deep-thinking skills to solve complex problems for the sake of the team. They look deeply into objective facts, study situations and leverage a natural creativity to arrive at sound decisions that will benefit the group.

Team Leaders are masterful at connecting the team together, creating safety, security and belonging. They stay focused on team cohesion and the development of organizational culture. They are about “us”.

Wise Leaders take measured risks after carefully weighing pros and cons and thinking deeply and logically about options. They are not impulsive or reactionary. Instead, having a natural aversion to overemotional hype that sometimes leads to bad decisions, the wise leader is very intentional and stays focused on making good, rational decisions.

We also, however, need yang leaders. When the Titanic runs into the iceberg, we need an extrovert in charge, organizing the process of getting everyone into the lifeboats. If an introverted leader is at the helm when we hit the iceberg, we might waste time conducting a research study on the pros and cons of different lifeboat seating configurations. We also need more yang-oriented leaders to provide vision and inspiration for the team and to keep us hopeful and optimistic about the future. Yang leaders tend to have a combination of four different leadership traits:

Crisis Leaders take charge when time is of the essence. They don’t waste time over analyzing the situation, but respond automatically or instinctually. These are typically great leaders in the military, law-enforcement, and other institutions and organizations that require regular and ongoing crisis management.

Results Leaders keep us focused and on task. They are driven to see results reflected in the bottom line. Investors love these kinds of leaders. They tend to be driven and motivated to see projects realize, profits maintained and growth achieved.

Visionary Leaders inspire us and help us dream larger dreams. They help us see the bigger picture, often emphasizing the forest instead of the trees. They tend to cast a picture of the future that becomes a shared vision, driving team goals and objectives.

Hopeful Leaders keep us motivated when the going gets tough. They inspire people for better days ahead and give us the courage to keep moving forward until those days become a reality. They leverage optimism to keep hope, a critical commodity for the team, from diminishing in the midst of adversity or challenge.

In the best world, yin and yang leaders work synergistically in mutually valuing and beneficial relationships with each other that best serve the entire team.

This article was excerpted from Andy Johnson’s book, Introvert Revolution, which is available on Amazon. To learn more about yin and yang leadership, email Andy at andy@price-associates.com