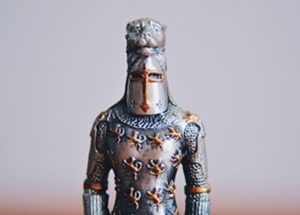 What would it look like to drop the armor you’ve been using to defend yourself? What are you protecting yourself from? I believe we want to shield our soul’s desires because we don’t want to risk injuring them. The crazy thing is that when we keep them locked up in a tower with the draw bridge lifted, we block out fulfillment, accomplishment, and joy.

A coaching client shared that she wanted to drop her armor and put down her weapons. The declaration surprised me because we were talking about what she wanted to do, not what someone else was asking her to do. As we dug deeper, she realized that she was blocking herself with unhelpful, unkind thoughts, beliefs, feelings, and actions. Knowing what she wanted was not the problem. Allowing herself to make progress toward her practical goals and soul’s desires was the challenge she faced.

A typical strategy is to identify the besieging thoughts, beliefs, feelings, and actions. Instead, my client and I opted for the opposite approach. She laid down her armor and gave herself permission to imagine what she wanted rather than what she didn’t want.

For a few minutes, allow your illusory armor to drop, set down your shield and weapons, and give yourself permission to open to what you want.

What do you want to think?
Thoughts become things. It’s that simple and that complex, which is why there have been many books written and movies made on the topic. The average person has around 48.6 thoughts per minute, which adds up to 70,000 thoughts per day, according to the Laboratory of Neuro Imaging at the University of Southern California.

The thoughts may sound like: I got the promotion. I have a successful business. My body is strong and healthy. Every day I meditate for at least one minute. I’m a great listener.

When you’re done for now, put the list in a place you can see and read it often. Act as if you believe them. Begin to validate them by noticing what happens when your actions reflect your beliefs.

What do you want to feel?
The first step in developing emotional intelligence is to practice self-awareness. In other words, to notice what you’re feeling. The next step is to regulate yourself, to choose your actions rather than unconsciously blurting out whatever you think or feel. In this same vein, consider how you want to feel.

Bring to mind a situation that causes you angst. Let’s say, Monday mornings. Perhaps, on Sunday evening you begin thinking about Monday morning and feel anxious, depressed, or worried. What would you like to feel instead? What if you felt inspired, upbeat, or proud? In your mind, practice saying what you want to feel.

What do you want to do?
Doing what you truly want to do starts on the inside with your thoughts, beliefs, and feelings. But magic can’t happen until you take action.

When I was an executive director, an endowment consultant once told me that while developing a strategic plan is crucial, she knew that magic would happen once we got out there and took action. She was right. We achieved a multi-million-dollar goal with happy surprises that happened while we were working our plan. (Thank you, Jill Burnette.)

Choose one thing that you want to accomplish. What action will you commit to taking that will move you toward what you want? Baby steps and tiny habits are astonishingly effective! Know that magic can happen when you start taking action.

You might rearrange your routine to accommodate 30 minutes, three days a week, for writing, art-making, or walking. After brushing your teeth at night, you might meditate for one minute.

Our thoughts, beliefs, feelings, and actions can form impenetrable defenses that block us from everything – the sorrow and the joy. Or, we can drop the armor, lower the draw bridge and let the good in. I’d love to hear which of these areas made a difference for you. Send me a note to Jalene@JaleneCase.com.